Long Island criminal defense attorney Edward Palermo (https://edpalermo.com/what-is-a-mistrial-in-a-criminal-case/) releases a new article explaining mistrial in a criminal case. The lawyer mentions that trials usually end with a verdict of either guilty or not guilty. However, there are cases when the court ends in neither. Mistrials refer to trials that are declared void. The judge may be able to stop legal proceedings if the grounds are met.

“When a mistrial occurs and is not recognized as such, it can result in a false conviction and cost an innocent person a host of troubles. A wrongful conviction is considered a miscarriage of justice and can have long-lasting effects on a person’s life. As many as 6% of all people incarcerated in the United States have been proven to be wrongfully convicted,” the Long Island criminal defense attorney says. 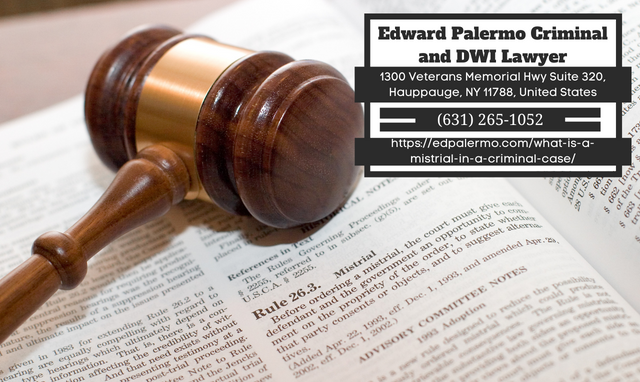 The lawyer adds that when a judge declares a mistrial, it means that the trial has been interrupted and cannot continue. There are several reasons for a mistrial to be called. Some of these reasons include that the jury is deadlocked and cannot reach a verdict, the jury tampered, or that the jurors were improperly selected.

Attorney Edward Palermo says that the judge may declare a mistrial at any point during the trial. Even after deliberations have begun, as long as the verdict has not been announced in court, it is possible for the judge to declare a mistrial. The entire trial process will have to start over from the beginning with a new jury or a different judge.

In the article, the lawyer says, “If a judge declares a mistrial, the defendant is not automatically acquitted and the charges are not dropped. The double jeopardy rule does not apply in cases of mistrial because, technically, the first trial was never completed. If a defendant is found not guilty in a criminal trial, the charges against them are dismissed and they cannot be tried again for the same crime. However, if the jury is unable to reach a verdict and a mistrial is declared, the prosecution may choose to retry the defendant.”

Lastly, the lawyer emphasizes the importance of having a skilled criminal defense lawyer when dealing with matters involving criminal offenses in Nassau County or Suffolk County, Long Island. An experienced lawyer may be able to help the client achieve a more favorable outcome.

Criminal defense attorney Edward Palermo has over 28 years of experience as a Suffolk County or Nassau County defense attorney. Along with his team of legal professionals, attorney Palermo has worked for the defense of those who are accused of criminal offenses on Long Island. To schedule a consultation, call Edward Palermo Criminal Defense today.