In Britain, nearly 200,000 workers are striking on Black Friday 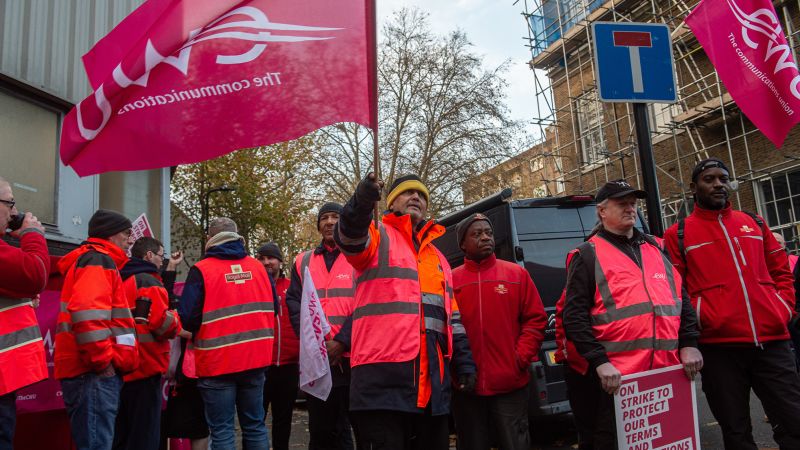 Some 235,000 workers have gone on strike across the United Kingdom this week, encompassing schools, universities and the postal service.
Workers are demanding better pay and working conditions as they struggle with soaring food and energy bills.
Strike action by as many as 115,000 Royal Mail staff on Thursday and Friday threatens to disrupt Black Friday sales and deliveries at a crucial time of the year for retailers.
Postal workers are planning further strike action for November 30 and December 1, following walkouts in August and September.
“Customers should expect delays to items posted just before, during or just after strike action,” Royal Mail said in a statement.
Amid worker strikes, Royal Mail vehicles remain parked at the Tonbridge Delivery Office in Kent, England on November 24, 2022.
Unison, a labor union representing nearly half a million health service workers, will complete its own strike ballot on Friday.
According to the Office for National Statistics, 356,000 days were lost to strike action in August, not far off the previous high recorded in July 2014, when 386,000 days were lost.
Strike action will also add to losses facing companies and could prompt further job cuts.
Royal Mail says it has not yet been formally notified of these dates.
“The CWU’s planned strike action is holding Christmas to ransom for our customers, businesses and families across the country, and is putting their own members’ jobs at risk,” Thompson said in a statement.
This is the third year that the Make Amazon Pay campaign has organized a global day of action on Black Friday.
Source