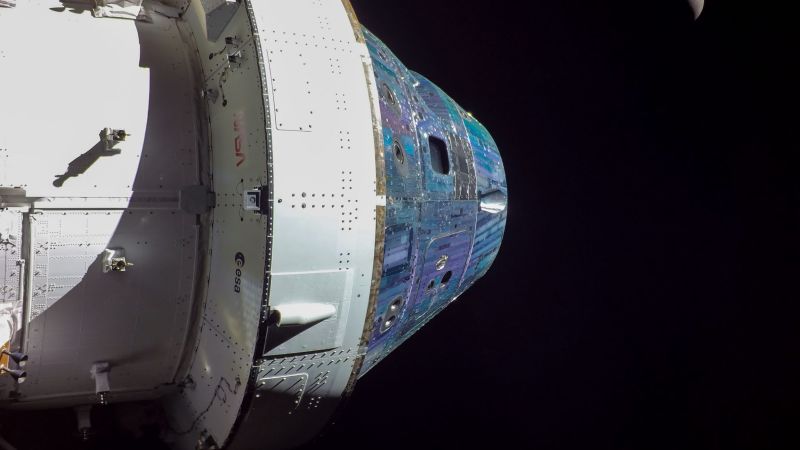 CNN —NASA released a selfie taken by the Orion capsule and close-up photos of the moon’s crater-marked landscape as the spacecraft continues on the Artemis 1 mission, a 25-and-a-half day journey that will take it more than 40,000 miles beyond the far side of the moon.
Orion’s latest selfie — taken Wednesday, the eighth day of the mission, by a camera on one of the capsule’s solar arrays — reveals the spacecraft giving angles with a bit of moon visible in the background.
The close-up photos were taken Monday as Orion made its closest approach to the moon, passing about 80 miles (129 kilometers) above the lunar surface.
On the sixth day of the Artemis I mission, Orion's optical navigation camera captured black-and-white images of craters on the moon below.
NASAShould Orion complete its trek beyond the moon and back to Earth, it will be the furthest a spacecraft intended to carry humans has ever traveled.
Orion is part of NASA’s Artemis program, which aims to eventually establish a lunar outpost that can permanently host astronauts for the first time in history, in the hopes of one day paving a route to Mars.
The Artemis I mission launched November 16, when NASA’s beleaguered and long-delayed Space Launch System, or SLS, rocket vaulted the Orion capsule to space, cementing the rocket as the most powerful operational launch vehicle ever built.
As of Thursday afternoon, the capsule was 222,993 miles (358,972 kilometers) from Earth and 55,819 miles (89,831 kilometers) from the Moon, zipping along at just over 2,600 miles per hour, according to NASA.
The path is meant to “stress test” the Orion capsule, as Michael Sarafin, NASA’s Artemis mission manager, put it last week.
According to NASA’s Artemis blog, the agency’s television coverage of the distant retrograde orbit insertion burn is scheduled for 4:30 p.m.
ET Friday and the burn is scheduled to take place at 4:52 p.m.
After lapping the moon, the Orion capsule is expected to turn back toward Earth and make a gentle splashdown landing in the Pacific Ocean on December 11.
Source