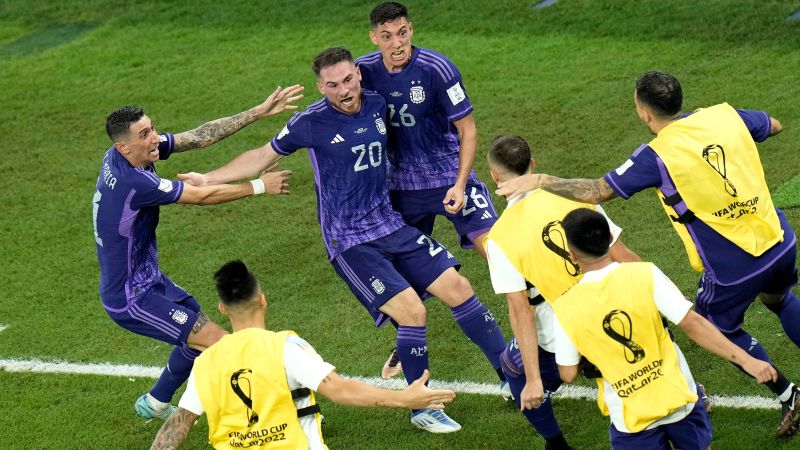 CNN —Lionel Messi had a penalty saved but Argentina booked its ticket to the knockout phase of the 2022 World Cup with a 2-0 victory over Poland.
Alexis Mac Allister’s scuffed effort 60 seconds into the second half broke the deadlock before Julián Álvarez’s brilliant curled shot sealed the three points as Argentina advanced as Group C winners.
The opener came after Messi, Argentina’s all-time top goalscorer, had his penalty saved by Poland goalkeeper Wojciech Szczęsny.
Álvarez’s sublime finish midway through the second half capped off a nail-biting evening for Argentina, who will now face Australia.
Poland advanced to the knockout stages by the skin of its teeth, qualifying on goal difference.
Playing in his 999th professional match, Messi looked up for the challenge, troubling Poland from the opening minute.
While the Polish attack offered very little throughout the game, Argentina cranked up the pressure – and both Messi and left-back Marcos Acuña coming close.
Szczesny saves a penalty from Messi.
It was Mac Allister’s first international goal, and continues his excellent year – he came to this World Cup as the top scorer for his Premier League club, Brighton and Hove Albion, this season.
Messi, Álvarez and Ángel Di María began to turn on the flair, toying with the Poland defense.
Midway through the second half, Álvarez showed why he’d been brought in for this game – he’d started the first two group games on the bench – curling home to get his first World Cup goal.
That was delivered by Salem Al Dawsari’s 95th-minute goal which gave Poland had a superior goal difference, assuring it’s progression to the next stage.
Source